Still quite busy for me, and I wanted to get out an update so people know the project is still moving forward in a positive direction.

A little over a week ago I started wave 2, which more than doubled the number of people looking at it. This made things quite busy as we have explored several interface additions to make the transition from EDIE/EDEE to EDCE more comfortable. Also, the crash issue situations are becoming quite rare. The testing group seems to be really enjoying the game, and their feedback has been very encouraging.

Out of this bunch, there are many Windows users, several Linux players, and some Mac OSX people. No platform specific issues have occurred, though at one point I did suspect one (see the graph issue mentioned later). Unity's different platform builds have been pretty reliable and consistent. 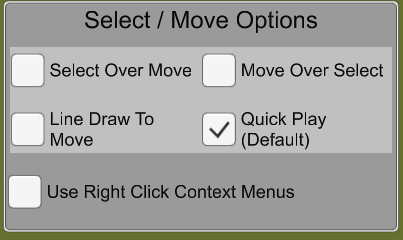 Regarding the interface changes, there are now four interface modes which can be selected to play the game. These modes essentially center around the question of : When you have a unit active, what to do when you click on the map? Are you giving a move-to order? Are you selecting a unit? Are you wanting to move the map? Part of the challenge here has been to try and facilitate the several play styles developed over the years. Here is a brief description of the four modes:

Keyboard or mouse? Command and Control has definitely evolved from what is reflected in the early twitch videos. A lot of effort has gone into adding more keyboard capability to the game.

The list of possible keybinds has grown quite a bit. This includes map scrolling keys for fast map movement. The EDIE keyboard style Move To command was just added as well. The modal dialogs have basics arrow key and return controls. If one desires to play with a keyboard only, we will not be at 100% coverage, but we are getting close.

For mouse or keyboard, the entire bottom portion of the interface can be toggled with a button/key and so you can play almost with a full map screen.

The interface has evolved due to the reports, reflections, emails and comments of the Wave I and Wave II testers. Their work has definitely helped make things better for all players. There actually have not been too many game breaking crashes, and when those happen they have been resolved. This play stability has let them play more and I think they are having a good time.

Well, life cannot be all rosy, so I will mention the largest outstanding issue is the Graphs. Unfortunately, when the game is played in Windowed mode, the graphs are displaced and look horrible. This is a scaling problem and it is looking like an expensive fix time wise, and I may switch to a third party graphing package if that becomes truly the case. This problem was originally reported on a Linux box, and then verified on the Mac. We Windows users were oblivious to this (I suppose we were all full screen) and so I thought it was a platform thing – but when I started to examine it closely I found it was a Windows issue as well. Ah, with collaboration between the platforms the world can be a better place..

So thanks to the testing team for their time and patience. And thanks to everyone that is waiting for the game while it goes through this process. Everything still seems on track for this to be out of the door by end of November, with a more open beta before that....but I have some degree of internal anxiety as October is here and the end is not that far away! So much to do. So little time.